We’ve been to Mallorca several times, albeit quite a few years ago, when our sons were young. We would fly into Palma with Thomson Airlines or Air 2000, be herded onto a waiting bus, then spend about an hour and a half listening to the ‘Welcome Speech’ by some bored transfer rep while desperately holding sick bags under the chins of our green-faced, travel-sick children. We’d arrive at Puerto Pollensa, a beautiful little traditional beach resort up in the north east of the island, loaded down with suitcases, kids’ backpacks, sunhats and (on our first visit) a pushchair. 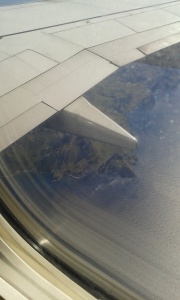 This trip was a very different experience. For a start, I’ve become quite on expert on frugal packing over the last few years, and can easily pack all I need for a two week city break in one piece of hand luggage. We booked the flights with Ryanair, the centrally located hostal through Booking.com, and knew that we would easily be able to manage with public transport and our feet to get from the airport to our base for the next week. We did our homework, checked the necessary bus route online, and printed out useful maps. Without the encumbrance of suitcases and tired toddlers, this would be a doddle.
What I hadn’t allowed for was the fact that I just wasn’t familiar with Palma.
I knew what the cathedral looked like, and I knew it was virtually on the seafront in the old part of the city. I knew our hostal was in the maze of little streets nearby. I knew that we had to get off the bus by a park at the Placa de la Feixina on the Avinguda Argentina. But the airport bus took such a long, meandering route to get into and around the city, and because we passed absolutely nothing on that route that I was able to recognise, I was seriously beginning to wonder if I’d somehow managed to choose the wrong bus.
Eventually, though, we were driving alongside what looked (from the map) like the park near our hostal, so we jumped off the bus and marched off in what we knew was the right direction. Unfortunately, the map I’d printed was no help whatsoever, as most of the tiny streets in the Old Quarter weren’t labelled and the roads that were didn’t bear any resemblance to what we were seeing around us. The fact that I hate having to use a map (simply because it clearly marks me out as a tourist!) made me reluctant to have to stop and check our bearings – or worse still, ask somebody! – but we stopped, got our bearings as

best we could, and decided that if we turned right at the next road we’d at least end up by the sea and could work out from there where to aim for. “What did you say the hostal was called?”, my husband asked, after about half an hour of aimless wandering. “Hostal Pons”, I replied; “Oh…..that one there, then?” he said, pointing down the road we’d not only just stopped at, but had also been past several times already.
The Hostal Pons, tucked away in Carrer del Vi, is….well,…..quirky! We guessed this from the descriptions and reviews online, but we knew, as soon as we stepped through the entrance into the pretty little whitewashed courtyard that this was no ordinary hostal.

The colourful tiled staircase up to the first floor (where the Reception is located) is dotted with pot plants, and at the top of the stairs a cat was nonchalantly draped over a wooden chair. Bikes leaned against the courtyard wall, and straight ahead was an archway through which we could see flowers and greenery lit by the strong sunshine.
We went up the stairs – the cat ignored us completely – and found the hostal’s Reception desk. A man appeared from nowhere, and after checking in he gave us a brief guided tour of the building. 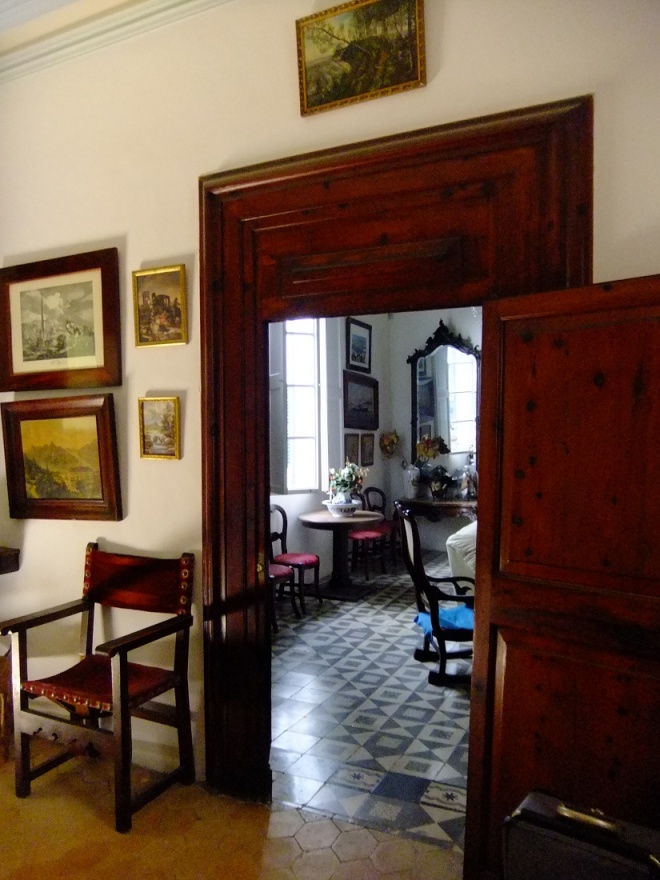 There were stairs leading up to a small rooftop garden, and a cluttered communal kitchen area where we could help ourselves to fridge space and utensils. A couple of communal rooms, full of taxidermy, old dolls, oil paintings and ornaments, made us feel like we were in a cross between an antique shop and an elderly aunt’s house.
Then we were shown our room. In the centre, a large bed covered with a heavy cotton monogrammed bedspread; a set of shelves and rails in dark wood made a wardrobe area, and an old dressing table stood next to the tall window.

On the wall, to the left of the bed, the head of the Virgin Mary gazed down judgementally. Leading off from the bedroom (through a curtained archway) was a bathroom with a shower and toilet. We opened the windows and let the sounds and sunlight from the little lane below seep into the room; time to say hello to the city!
We quickly freshened ourselves up, changed into cooler clothes and off we went. I love that first exploratory venture into a new place; senses are heightened, so you notice the sounds of the birds and the echo of voices further down the street. 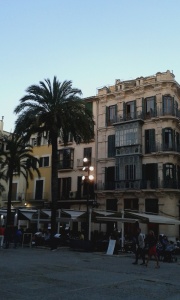 You smell flowers, coffee, garlic, cologne; you feel the late sun on your face as you emerge from the narrow, shaded street into a little square; you notice the cobbled, uneven pavements, the lettering on the street signs, the wrought iron balconies, the cats curled in doorways, the chit-chat from pavement cafes and tapas bars where waiters are setting up tables ready for pre-dinner drinks and nibbles. You hear the sticky sound of car tyres gripping on the hot road and a radio blaring out Latino music from an apartment. Ah, Spain, how I love you! 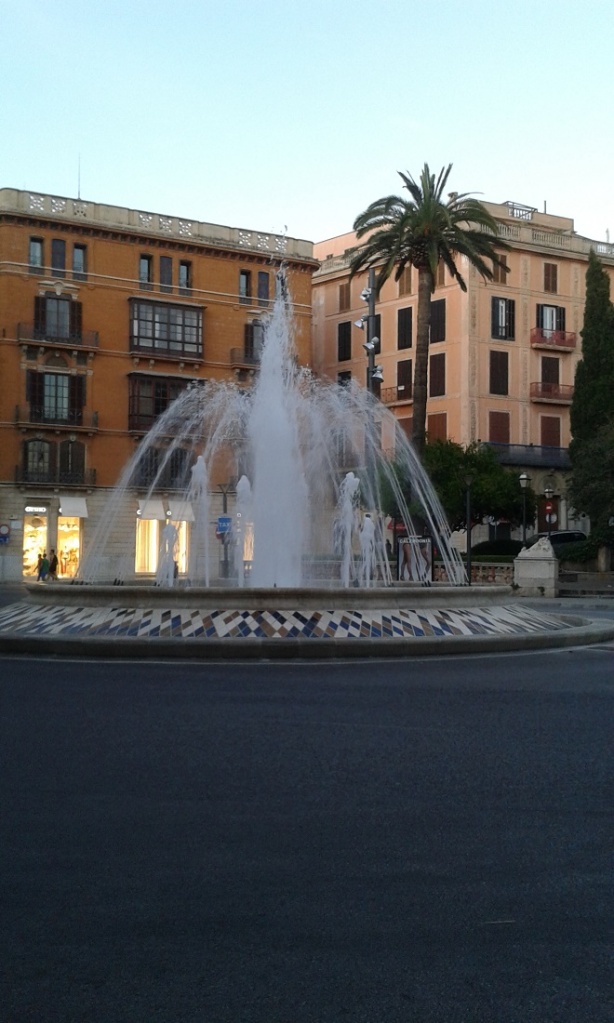 We make our way towards what we guess is the city centre, along a street lined with restaurants and bars, until we come to the Passeig del Born – a tree-lined promenade with traffic on either side leading from a fountain close to the beautiful Seu (cathedral) to the main shopping street.

By now, the sun is lower in the sky, and the heat of the day is subsiding. We wander up and down the Paseo, admiring the balcony windows jutting from the beautiful Art Nouveau buildings, the statues, the fountain and the stunning cathedral soaring up behind the palm trees. We discover where Palma’s ‘El Corte Ingles’ department store is located, we check out the various ‘Heladerias’ (Spanish ice cream is wonderful!) which we will need to try out during the week, and we make a note of several ‘Pastelerias’, their windows adorned with fruit tarts, different types of bread, fabulous cakes and massive ‘Ensaimadas’, big, soft brioche-like pinwheels, drenched in icing sugar and packed into pretty hexagonal boxes and given as gifts to family and friends.

We’re hot and hungry, so we start to glance at menus as we pass different restaurants. They’re all inviting, but for now we want something quick and cheap, preferably accompanied by a few glasses of something refreshing and alcoholic. I do like to try the local cuisine, but we ended up coming back,

eventually, to the street leading back to our hostal, to a busy little pizza restaurant with really good-looking (and delicious smelling) pizzas and cheap jugs of sangria. It was still a little early to eat by Spanish standards, but the place was already crowded so we were given the last table, up on the mezzanine overlooking the bar and the other diners, and right in front of the kitchen. The owner came and took our order, and we watched him down at the bar mixing a VERY potent jug of sangria, while through the serving hatch into the kitchen next to us, we watched a really hard-working chef create magic with pizza dough and delicious toppings. The meal was perfect; the pizzas were as good as any I’ve eaten in Italy, and with a decent mixed salad and some garlic bread, all washed down with copious amounts of good sangria, we left the restaurant feeling full, happy and just very slightly squiffy.

We still needed to unpack (and have a cool shower!), but the sun had gone down and the city had come to life. The fountain at the end of the Passeig del Born was lit up, and old-fashioned wrought-iron street lamps twinkled behind the leaves of the trees lining the road. The cathedral was bathed in soft yellow floodlights, and palm leaves were silhouetted in front of its ornate facades, beneath a crescent moon in the clear, darkening sky. Lights were on in all the shops and restaurants, and looking up we could catch glimpses of ornate chandeliers inside the balconied windows in some of the art nouveau buildings lining the Passeig. Outside every café and restaurant, the

tables were filling up with groups of friends, families, lovers and tourists, but we wandered through the narrow lanes back to the hostal to unpack and have a shower. In the street below us, we heard snatches of conversations from people passing by, and with our cabin bags emptied, clothes folded or hung up, toiletries lined up in the bathroom and phones charging, we stumbled into bed, tired but excited, beneath the saintly gaze of the Madonna….